We present below the technical specifications of the HTV-X being developed. 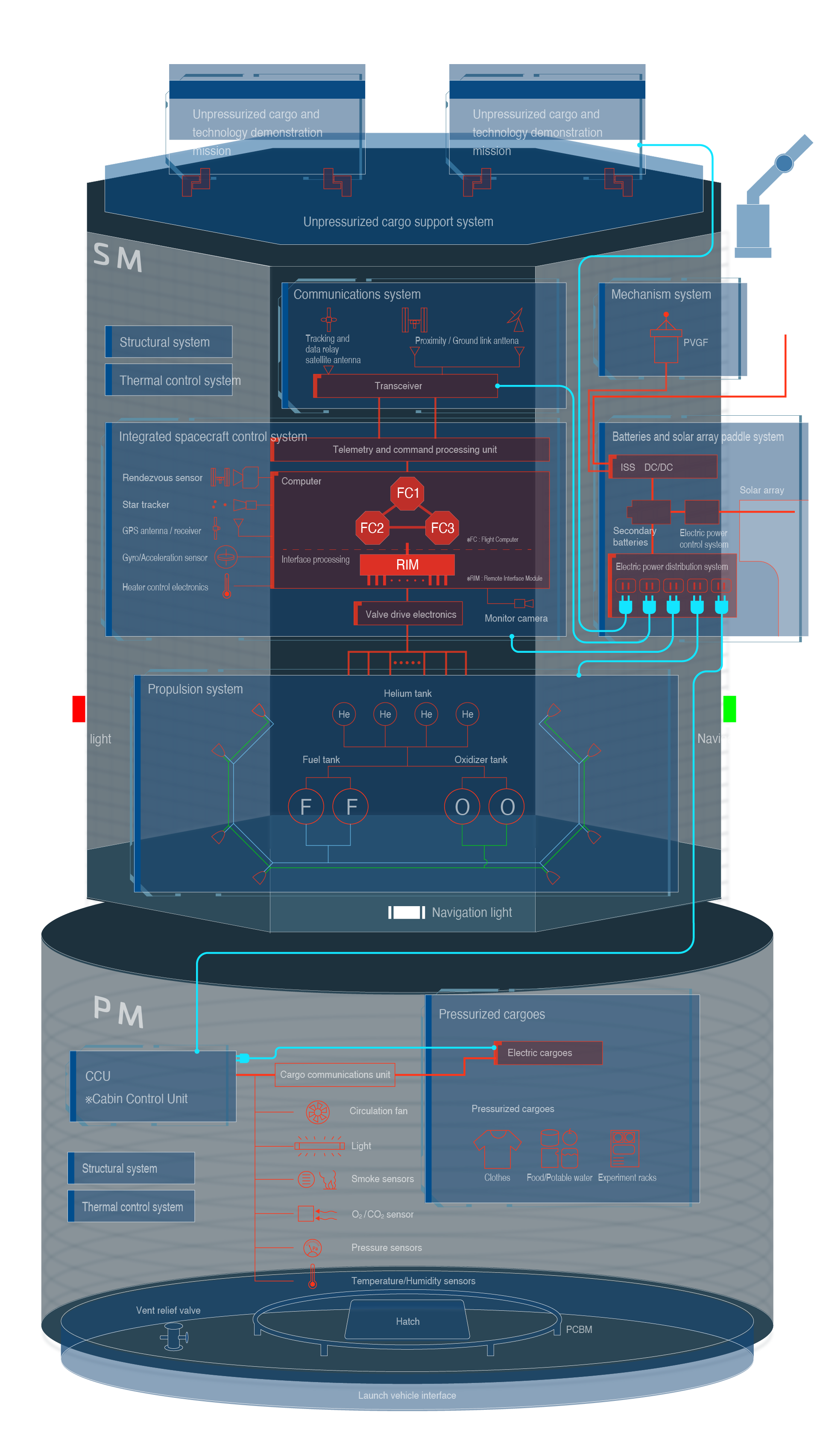 The communication subsystem performs data communications to monitor and control the HTV-X navigating in space from the ground station. It consists of two types of antenna which are selectable by three communication paths and a transceiver which sends and receives data with these antennas.
NASA's tracking and data relay satellite (TDRS) antenna is used when the HTV-X remains far away from the ISS. It is used for relay communication via the TDRS positioned higher in a stationary orbit (at an altitude of 36000 km).
The HTV-X has a Proximity Communication System (PROX) antenna which is used for direct communications with the ISS positioned near. KOUNOTORI also used this PROX antenna for the same purpose. In addition, PROX antenna on the HTV-X will have function for direct communication with the antenna of the ground station. It is applied in the "technical demonstration mission" phase after leaving the ISS.

The integration control subsystem composed of three flight computers (FC) represents the "brain" of the HTV-X. It integrates the three functions including "navigation guidance control" (recognition and control of the spacecraft's position, speed and attitude), "data processing" (coordination of various signals sent to and received from the ground station) and "system management" (monitoring of signals sent by the devices installed on the HTV-X).
With KOUNOTORI, each of these three functions was assigned in different computers. Integrating the functions of all these computers makes the data flow in the HTV-X simpler and smoother.
The three flight computers perform the same task simultaneously while their computational results are being checked for correctness based on a rule of majority. This ensures great safety and reliability. And even in the event of failure in two of these FCs, the third one would proceed with the integral operations for continuing the HTV-X's flight. 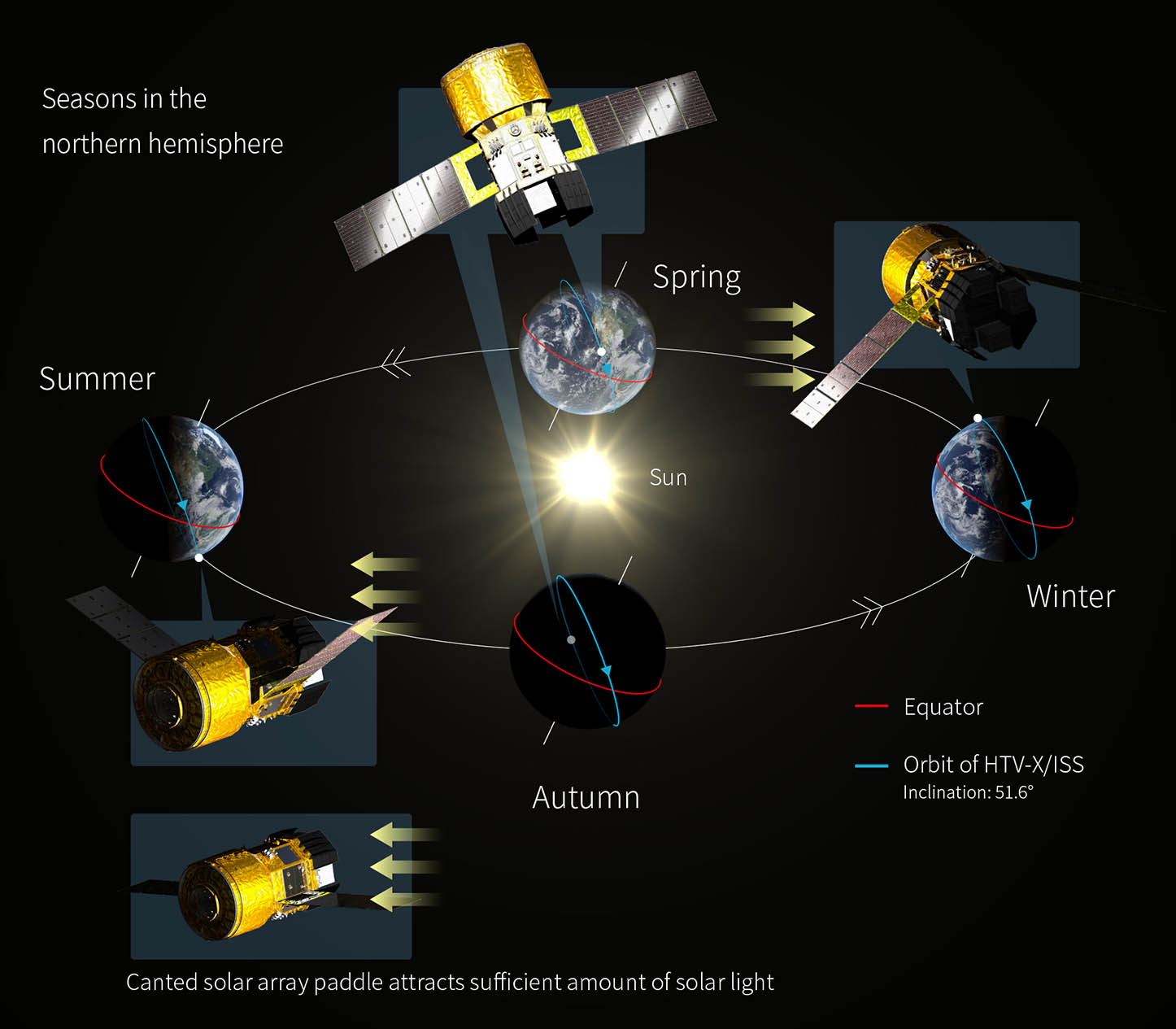 Moreover, increasing the capacity of the secondary batteries will help reduce the size and quantity of the primary batteries (expendable batteries) as used in KOUNOTORI and streamline the spacecraft in weight. 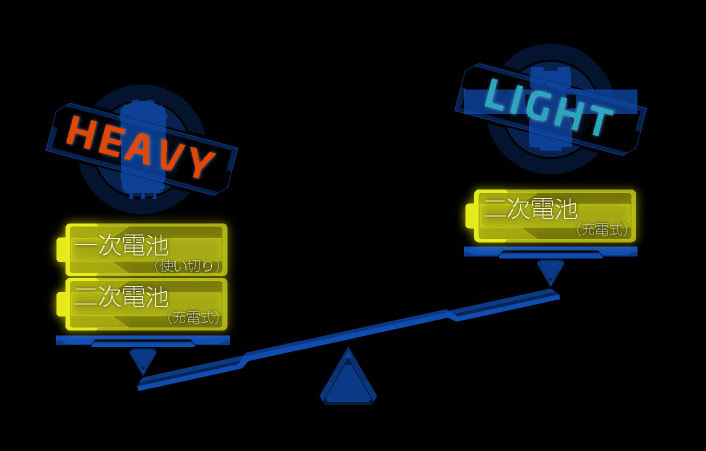 The propulsion subsystem controls the attitude and orbit of the HTV-X by means of a small rocket engine, called a "thruster", operated by the integration control subsystem.
KOUNOTORI had multiple thrusters, and the propellant pipes were routed across multiple modules of the spacecraft. As for the HTV-X, thrusters and associated pipes will be assembled only on the Service Module. This will greatly shorten the spacecraft assembling period at the Tanegashima Space Center and will reduce the overall cost, and will at the same time contribute to improving the cargo services.
An inventive layout of thrusters and an ingenious firing scheme will allow the four large thrusters (main engines) used in KOUNOTORI to be replaced by a simpler propulsion subsystem.
Moreover, the fuel capacity will be increased by 30 percent over the KOUNOTORI. This feature will enable the HTV-X to conduct complicated technical demonstration missions, in addition to the logistic mission, that involve change of orbit and attitude.

The structure subsystem is the framework of the Service Module.
This subsystem has a double structure composed of an outer octagonal cylinder and an inner penetrating cylinder (central cylinder). It efficiently supports the loads of exposed cargoes and devices for technical demonstration mission during launch. The designed central cylinder has an inner diameter of at least one meter, sufficient size for one astronaut to pass inside. So, this subsystem has a good expansivity that may allow the HTV-X to be utilized as a segment of the International Space Station.
The HTV-X's characteristic octagonal shape has been chosen because thrusters, solar cells and other devices can be mounted on the lateral sides to leave space in the Service Module.
(Have you found octagonal shapes disseminated on pages of this website?)

The Pressurized Module is used to stow cargoes to be used in the ISS (experiment racks, experiment devices, potable water, foodstuffs and clothing).
The pressure in the module is kept at the atmospheric pressure (one atm), same level as that on the Earth. While the HTV-X is moored on the ISS, astronauts have access to this module to perform operations.
The Pressurized Module of the HTV-X will make the best use of the KOUNOTORI's characteristics. This is for the purpose of limiting the development costs. The wide hatch, similar to those of the KOUNOTORI, that the HTV-X will have is a legacy of the predecessors which have been unique spacecraft capable of transporting large-sized experiment racks (International Standard Payload Rack, ISPR).
The enhanced capabilities with additional sensors and the features for cargoes that require power source (cargoes to be powered) will enable the HTV-X to transport a wider variety of cargoes.